I used to think that ALL Mexican restaurants served their customers fresh, smooth salsa, warm, crispy tortilla chips AND creamy, seasoned white sauce once everyone was seated. At least, that’s how it always happened in southwest Virginia when I would go to one with friends or family.

We’d pile in at a table, and immediately, after the waiter or waitress would greet us with a basket of greasy chips and our dipping options, we’d start chowing down. You know how it is! You start talking, recapping events, laughing, having a good time with those around you. Sipping on your cold adult beverage. Mindlessly reaching towards the middle of the table every now and then. Browsing the menu even though you’re going to get what you ALWAYS get.

And the next thing you know, before you’ve had time to order, you’re asking for refills on the chips and sauces!

With the salsa, I could always restrain myself. To an extent. And after cramming quite a few pieces in my mouth already. But with the White Sauce, I had (and still have) no self-control. It’s gotten to the point where I’ll polish off a bowl all by myself before the meal even comes! Disgusting. I know. But? SO delicious.

Have you had it before?

It’s White Sauce. It’s more addicting than cheese sauce. Consistency wise, it’s kind of like Ranch. But also not. It’s thicker. It’s tastier. Better. Which is saying something considering I LOVE Ranch. It’s spicier, but not a hot-kind of spicy. It’s made up of a white base, with green, red and black flecks mixed in. 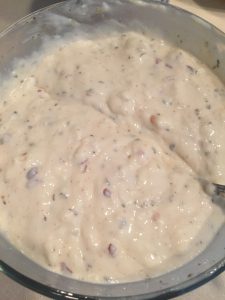 Apparently, it’s also RARE. As far as I know, you can only find it in VA and NC, which is just a shame. CAUSE IT’S SO DARN GOOD!

Truthfully though, I don’t care where it came from! I only care about consuming it and sharing the recipe with EVERYONE.

Especially those that don’t know what I’m talking about  (cause they just don’t know what they’re missing out on AND I don’t want them to continue thinking I’m crazy) and those that work in Mexican restaurants (so they can start serving it at their workplace and spreading the joy to others’ tastebuds).

But finding out what was in it was NO easy task. It was actually a lot harder than I imagined in this technological day and age.

Whenever we’d ask the servers about it, they would never divulge their secret recipe, and it was so classified (more like just unknown) that even Google had no idea what I was talking about.

But all of that changed recently with an article I found that goes over the history of the sauce and, more importantly, WHAT’S IN IT!

To make your own White Sauce, you’ll need these items.

This recipe recommended mixing all the ingredients together and letting it chill for two days before serving cold with chips. Personally, I couldn’t wait that long to try it, and I ended up devouring it all within that time frame. Yup…there goes my plans to lose weight.

I’m sure there’s other variations of this sauce, so you can definitely play around with it. However, I found it was pretty awesome just as is!