I ended up making a batch of these for the 4th of July, so, naturally, I had to incorporate red, white and blue to make them patriotic! It was pretty simple too. I just dropped red food coloring into the cheesecake mixture, bought some white cupcake liners and topped them off with a blueberry compote.

When all was eaten and gone, I was so darn proud of myself! It was fun getting creative in the kitchen. Normally, if there’s no recipe to follow word-for-word, then I don’t even attempt it. But that was not the case this time. I think it was because our 4th of July was NOWHERE near normal. All usual, and traditional, happenings and events were cancelled.

So, it was comforting and uplifting to get into the holiday spirit in a different way.

Yeah…visually, they aren’t the most appealing, even if they are ‘Murican, but they tasted as a cheesecake should taste!

They were creamy. Rich. With a buttery crunch on the bottom and sweet, juicy blueberries on top.

These cheesecake cupcakes are DA BOMB because they are perfect for ANY occasion.

Whether you make them for an upcoming party, event, holiday or just because!

Not only is the recipe versatile, but it’s easy!

Easy to fix. You basically throw everything into a bowl and blend.

Easy to transfer. Since they’re cupcakes, you can put in a muffin pan, or a regular one, and place the lid (or some covering) over top.

Easy to eat. No plate and fork necessary!

So, here’s the original recipe, which I got from 500 Cupcakes: The Only Cupcake Compendium You’ll Ever Need! 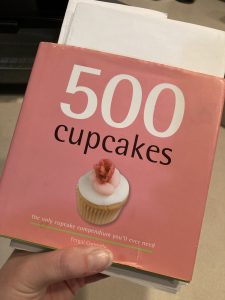 From there, I modified the ingredients and instructions to fit the occasion and what I already had in pantry.

Start off by preheating your oven to 325. Even though you won’t need it for a bit.

Then, take your baking cups, and line the muffin pan.

Now, the original recipe says it yields a dozen.

However, I had SOOO much cheesecake mixture leftover, you could probably do a dozen more.

Crumble up whatever it is that you’re using for your base!

Make sure it measures out to a cup.

Melt your butter, and combine.

Take sandy mixture and drop a spoonful into each baking cup.

Press firmly into the bottom.

If you have some crumbs remaining, you have two options. You can divide between your baking cups, or you could set it to the side and use it to make another dozen. Like I said, you will definitely have enough cheesecake mixture!

As they are chilling, grab the ricotta and beat until smooth.

From here on out, I took my time. I don’t know if that was really okay or not… but I wanted to make sure each further addition was fully incorporated.

Can you over beat this kind of mixture???

Eh…if you’re a pro, you may want to do this part differently.

If you’re like me…once your ricotta is smooth, add the softened cream cheese.

Sift the confectioner’s sugar. I just used a mesh strainer!

Then, slowly add the confectioner’s sugar to the mixture.

Splash in the vanilla extract.

If you’re going to use food coloring, I would go ahead and squeeze in the dye here. Use however much amount until you get the coloring you want!

Slowly slip your eggs in the mixture.

And real quick – I’ve got to thank my grandpa for the ones I used!

Fresh from Virginia, and straight from the farm to my refrigerator. There is something to be said about home-farmed eggs.

Make sure everything is blended well, and voila!

Grab your crumb mixture from the fridge.

By now, your oven should be ready.

If not…then you’ve got another problem on your hands.

Bake them for 25 minutes.

Once they’re done, remove pan from oven, and let them cool for 5 minutes.

Then, remove the cupcakes from the pan and place on a cooling rack. I used a spoon to make the process easier.

By this point, the centers will start to cave. Don’t freak!

Next, add your topping of choice!

The original recipe called for fresh blueberries on top, but you could add any type of fruit.

Heck, you could skip the fruit and throw cookies on top.

That’s partially what makes these so adaptable to any occasion and to any taste-bud preference.

For numerous reasons, I went with a blueberry compote that you can easily whip up too! Just google one.

Lastly, chill until ready to devour!