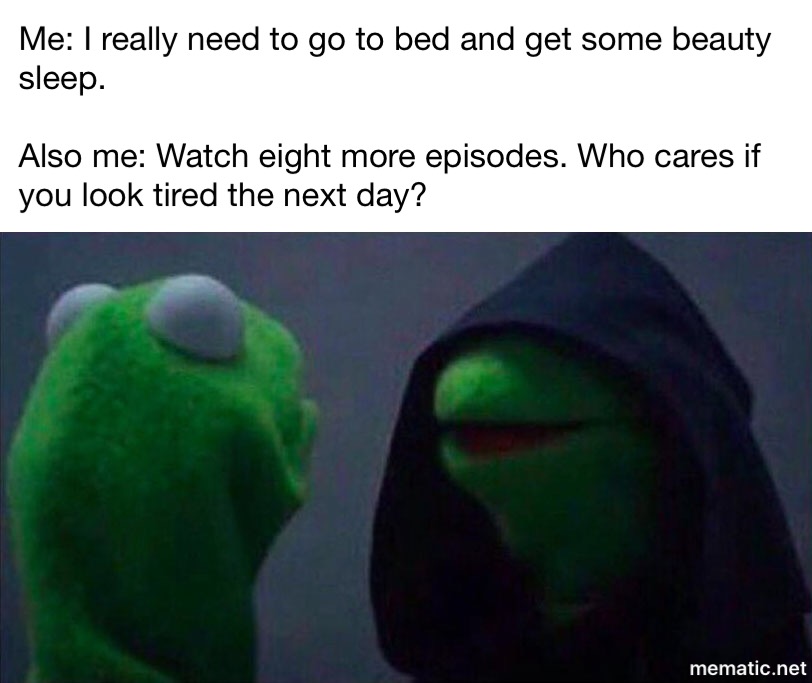 The Netflix struggle is real!

What are you watching on Netflix these days? Or should I say what are you binge watching? And don’t lie… I KNOW that you are glued to the cushion and screen every evening after work and on the weekends too! Hey. I’m not judging. No shame. After all, it’s how I spend my downtime too. Especially recently. Netflix is so on point these days with their content.

I used to NOT be addicted to Netflix, believe it or not. I was pretty happy to just watch a little Bravo action and read my books to wind down after a long day. But with the latest Netflix Original’s? Not anymore. The shows are unique and captivating, and more often than not, I HAVE TO KNOW HOW IT ENDS. JUST ONE MORE EPISODE! A.k.a. one that turns into three and the next thing you know, it’s tomorrow and you have to be up and at ’em and bright eyed for work in a few hours. Then you spend all day thinking about what you just saw, talking specifics and theories with anyone who will listen and waiting impatiently for the next episode.

Do you hear that now? It’s that one comfy spot on the couch – the one that’s optimal for viewing the tv and has your butt imprint permanently ingrained in the material – calling your name as we speak, as well as that glass of wine, AND those riveting characters and plot lines.

Heck, I’ve got a broad, muscular, red-headed, kilt-wearing, sword-wielding Scottish lad waiting for me at home in my living room as we speak!

I mean, not in real, real life. Obviously… Unfortunately… On tv, actually. He’s one of the main leads in Outlander, a show on Netflix that I’m currently HOOKED on and can’t stop watching. It’s one of many series that I LOVE, LOVE, LOVE right now.

So, if you’re looking for a new binge-worthy program, here’s a few suggestions.

First and foremost, as mentioned above, Outlander.

If you like English/Scottish history, the tense battles between the two, as well as a little romance with a dash of supernatural, then check it out!  Originally, it aired on STARZ and was nominated for a plethora of awards, evening winning some. So, when I saw it appear on Netflix, I knew I HAD to watch it. Even though I don’t normally watch those kinds of dramas, I have yet to be disappointed. To try and quickly (key word TRY) summarize the plot, Claire Randall, a nurse for the British army during World War II returns home to her husband Frank, who was also involved in the war. After being apart for years, to rekindle the fire so-to-speak, they travel to Scotland on a second honeymoon. During their time there, and after a series of events including one ancient Gaelic ceremony, Claire is transported back in time to 1743! She’s dumped right into the middle of the war between England and Scotland, and not only does she have to gain the trust of her rescuers, being an English woman in the land of the Scots and all, she has to do it while facing obstacles in regards to her sex, her medicinal practices and more. ALL while trying to get back to her time. And did I mention there’s a hot Scottish fella to look at too?

Speaking of good-looking men, I just wrapped up all four seasons of Lucifer too.

And yes, I promise I do actually watch shows for more than just the eye candy, but let’s face it – it definitely captures your attention! Like with Lucifer. A devilishly handsome man that lives a lavish and uninhibited lifestyle. Who is quite literally the Devil! But like everyone, he needed a little break from work. So, he’s took an extended vacation from hell in Los Angeles, the city of Angels. Lucifer is quite literally hiding in plain sight. Though hiding isn’t even the right word because he tells everyone he’s the Devil, and he is VERY open about his life. But they don’t believe him. I mean, would you? So, they just blow him off. Like his partner, Chloe. Together though, they make the perfect team solving crimes. With her following the books to deliver justice and him breaking the rules to deliver punishment. And to make this show even more unique, Lucifer, aka the DEVIL, sees a therapist to help him work through these foreign, human emotions he’s starting to feel and guide him through his daddy issues! Which are HUGE. It’s really not your typical heaven vs. hell/angels vs. demons show. There’s a little action. A little love interest. A little lesson in biblical history. And there’s a TON of humor. And did I mention there’s a very attractive male? With a hot accent?

And last but not least, I wanted to mention Someone Great.

It’s not a show but a movie on Netflix. One that YOU NEED TO WATCH. I’ve been obsessed with all the cute love films Netflix has released recently. Like To All The Boys I’ve Loved Before, Set It Up, Sierra Burgess Is A Loser, Dumplin‘, The Kissing Booth! Just ugh. My heart melts even THINKING about them. I’m a sucker for love. I really am. So, when I saw the preview for Someone Great, I added it to my list, and I FINALLY got around to watching it this past week. It was so relatable, so cute. But different from your usual love stories. Because it was so REAL. I won’t give it all away, but it’s about a woman, Jenny, who just got a kick-butt job across the country at Rollin’ Stone. With the move looming, Jenny and her boyfriend, who she’s being seeing for nine years since they met in college, break up. The movie chronicles the days after, as Jenny and her girlfriends plan one last hooray together at their favorite place. There’s also flashbacks to Jenny’s relationship sprinkled throughout. Will they get back together or nah? Watch it to find out!

Once I wrap up Outlander, I’m moving on to Stranger Things season 3, and I’m hoping to finish up Friends since it’ll be leaving Netflix soon. What else should I add to my list? What would you recommend? What can you just NOT stop watching???