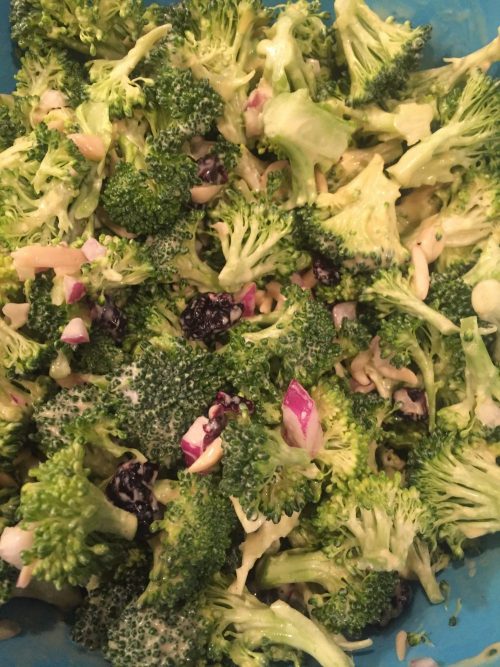 All I really wanted to fix this week was a big ole batch of warm, soothing and tasty tomato basil Parmesan soup in the crockpot with a side of m-e-l-t-y, golden brown grilled cheeses! With some dill pickles sprinkled in each sandwich. Mhm. My stomach’s growling at just the thought. Hey! Don’t knock the pickles until you try it! Lawd! It’s all I want right now. Along with leggings, flannel, hoodies, boots, a glass of red wine while curled up on the couch all snug as a bug under the throw blanket while reading a mystery, leaves swirling in the wind outside.

But alas, it is still too BLAZING HOT outside for all that. Although I’m in that fall frame of mind, Mother Nature is not on board. At all. According to the 11 seasons of South Carolina, I believe we are in the Hell’s Front Porch stage right now.

Therefor, I had to put the soup on a back burner (pun intended), for now at least, and figure out something else to eat this week.

That’s when I came across a broccoli and honey mustard salad on BudgetBytes.

Could a salad get any more perfect? I love broccoli. I could eat honey mustard by the spoonful. Well, I mean, not really. That’d be pretty gross. But I do enjoy drowning my fries, nuggets and more in that tangy sweet sauce. Dried cranberries, those infused with other fruit juices that is, are delish and almonds just give anything a nice little texture. Toss in some potent diced onion, and what’s not to like?!

It looked simple enough to fix, and I already had most of the ingredients in my kitchen. Plus, it holds up well because of the raw broccoli. The dressing does soften it up a smidge in the fridge, but not so much that it’s mush. There’s still some crunch after a couple of days.

So, I went for it! And I was not disappointed… when I finally found the energy to put it together. Yeah, it’s a real simple salad that doesn’t require much effort at all, but it still takes me awhile to come around to prepping and fixing meals. Even ones as easy peasy as this, and trust me, it doesn’t get any more painless than this. Overall, it took me 20 minutes to throw together, and it only took me that long cause my knife skills are sub par.

I have a tendency to put meals together and then not eat them. Either because I didn’t really like it or I just got sick of it. I hate leftovers. That’s not the case with this salad though. I’m definitely going to finish it all. Dare I even say I might just lick the bowl when I’m done too? Because that dressing is so. on. point! To really drive the point home, this salad has now got a place in my favorites folder, which is a super small collection of recipes because to make the cut, it’s got to be STELLAR. At the very least, it’s got to be cheap, easy and make me go back for more.