Day of the Dead Dip Recipe

By now, everyone pretty much knows that I absolutely LOVE Day of the Dead and Halloween and mostly everything associated with the two occasions. My mom has known this for years now, and all I got to say is bless her for putting up with my fascination, borderline obsession, of it all, but I also have to thank her tremendously though. Whenever she sees something related to the two holidays, she’ll either surprise me with a little gift or tell me all about it.

Half…okay, probably most… of my wardrobe for this time of year comes from her. Over the years, she’s gotten me witch-hat earrings and numerous sugar skull ones, supernatural scarves, striped black and orange socks and long witchy ones that remind me of the movie Practical Magic, leggings splashed with beautifully decorated skulls and another pair with black cats and pumpkins and bat eyes, and how could I NOT mention the t-shirt she just bought me that showcases a ghost drinking wine with the phrase “I’m just here for the booos!” And that’s just to name a few items she’s purchased that currently reside in my closet or dressers.

Now that I think about it…A LOT of my home and office Day of the Dead/Halloween decorations have also passed from her hands to mine…signs, candles, dish towels, soaps…

Recently, she texted me a recipe that she found in a magazine that is PERFECT for Halloween and Day of the Dead! I really wanted to make it, but at the time she sent it, I didn’t have any plans to go to a huge party or small gathering of friends. The opportunity presented itself over this past weekend though. My boyfriend and I were going to be carving pumpkins with his parents, so, naturally, I wanted to bring something. Something that was festive. Something that was easy cause lawd knows I can’t cook that well. It hit me right there in the kitchen as I’m pondering what in the world I could bring. BOOM. DUH!  The recipe Mom (always coming in clutch) sent me the other week.

It was instructions for a Day of the Dead Dip, aka Veggie Skull and Hummus Dip.

As I’m sure you’ve seen, there are numerous posts on the interweb where people have tried to recreate recipes they’ve seen, and they fail. Horribly. I’ll admit, I’ve been one of those people. To say the least, I was worried that would happen to me again…but it didn’t! Look at how mine turned out! Not bad, if I do say so myself… I mean, yeah, it’s not EXACTLY the same, but it works! 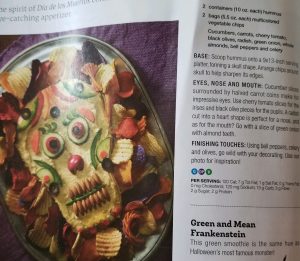 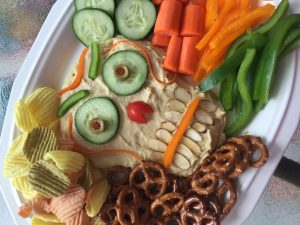 I ended up modifying the recipe a little bit to fit my needs. I knew there would be just a few of us, and two containers of hummus seemed like a lot. So, I ended up halving it. Thankfully, it worked out just fine! Since I also had a smaller canvas, I didn’t use nearly as many veggies to decorate. The leftovers were used for dipping, and I also added some pretzels for variety. I threw this together in a little over 30 minutes, which means you could probably do it in less. It’s just my knife and artist skills are lacking.

2 containers of your choice of hummus, 10 oz. each

One container of hummus

2) Play with your food and get creative

3) Bring to your festivities and get ready to impress