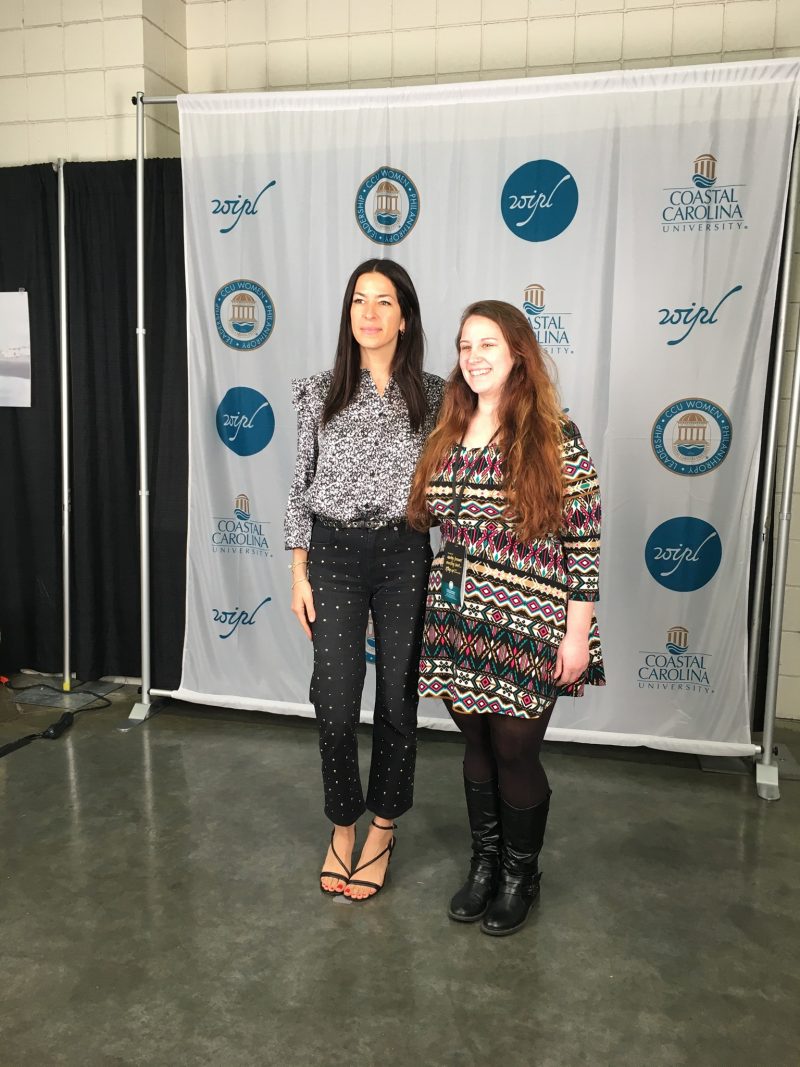 Rebecca Minkoff and I at the 10th Annual Women in Leadership Conference! What an AMAZING and empowering woman!

Wise Words To Live & Work By!

Recently, I had the pleasure to attend the 10th Annual Women in Leadership Conference, hosted by Women in Philanthropy and Leadership for Coastal Carolina University. Aka WIPL.

Ever since I started working for the station, and heard about it my first year with the company, I’ve wanted to go. And it was not a disappointment, BY ANY MEANS.

The conference, and the celebration that takes place the night before, “…brings together women from all walks of life for two days of education, professional and personal development, and networking.” Basically, it’s an event that is dedicated to, and full of, inspiring women, and the speakers this year? So. On. Point.

The women were, to put it simply, impressive, and I wish I could cram everything I learned into this post. Unfortunately, I can’t. However, I CAN pass along some snippets of inspiration that were shared at the seminar. These little capsules really stuck and resonated with me.

“What’s the worst that could happen if you fail?”

I am scared of failure, and I’m not afraid to admit it. With that being said though, I would allow that fear to get in the way of opportunities. If I didn’t think I could complete the task, and perform it to a T, I’d shy away from it. Hindering my chances of personal and professional growth.

But then, Rebecca Minkoff presented failure in a different light at the conference. She talked about confronting fears of failure head on, and once she did that, she realized that no matter what, she would still have her family and friends. Yes, she may have to start over or something. But she’d still be surrounded by those she loved.

And when you think about it, she’s absolutely right!

“Take your role. Don’t wait for it to be given to you.”

Before the conference, I was researching the speakers and trying to figure out who I would like to hear in the breakout sessions. Immediately, I gravitated towards Erin Bagwell. Erin is a feminist blogger, a podcaster and a filmmaker. She recently directed Dream, Girl, a “…documentary showcasing the stories of inspiring and ambitious female entrepreneurs.”

As a side note, it also happened to be created by an all-female crew. Pretty cool. AND you can watch it for free online!

Anywho, during the showing, we learn about one woman’s experience working in a male-dominated field. She discussed two separate incidents.

The first occurred during a business meeting. A man had been going around the table, shaking hands and introducing himself, like any businessman would. However, when it’s her turn, he skips over her and continues on down the line.

The second happened at a conference that she was working with her co-founder, who is male. Someone came up to them to ask more technical questions about their product, which was her area of expertise. However, all the questions were directed at the co-founder. Even after it became clear he didn’t have the answers and she did. Awko-taco.

After we saw the film, a woman in the audience spoke up about similar experiences. Essentially, at meetings, she was treated like a secretary. When that wasn’t what she was hired to do. Instead of falling into the pigeonhole, she recommended to take. your. role. Right off the bat. Right out the gate. Own it. Don’t wait around for it to be given to you.

I wanted to leave you with this last saying that Meg Ham, President of Food Lion, read when she was younger and shared at the event. Pretty self-explanatory I think.

Honestly, I learned so much from this awesome gathering of women, and I’m really not just saying that just to say it. Even though it’s been a week or so since the seminar, I’m STILL feeling inspired and motivated, both personally and professionally! And better yet? I’m doing something about it.

If you have the time and resources, I’d highly recommend going to next year’s conference!