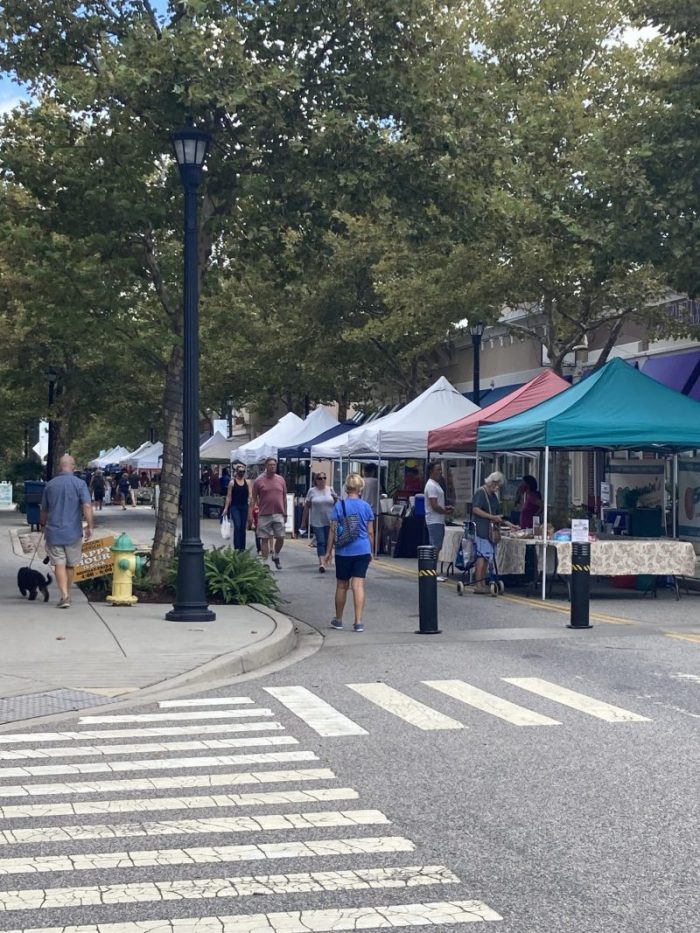 The farmers market at Market Common!

I am slowly, but surely!, marking through items on my Ultimate Beach Bucket List.

Truthfully, as you may have noticed, I’ve been slacking a bit. It’s much harder, waaay more difficult than I originally thought, to get things done with this darn ‘ole virus going around.

… stupid pandemic… it is ruining EVERYTHING.

With the mandates and guidelines, businesses aren’t up and running like they used to operate, and who knows if they ever will again.

Even worse, some aren’t open at all, and I doubt they will be in the future!

Events are being postponed and cancelled left and right (even the ones months away) because those in charge, and others too, are concerned about spreading the virus and endangering the health of those that attend.

In addition to all of that, I contracted the virus, and I was down (literally laying on the bed and couch all day err day) and out (or should I say locked in) for 2 weeks.

Soooooo, I haven’t made much progress, but I haven’t given up on it!

Most recently, and after only talking about going for WEEKS, I finally ventured over to the farmers market on Deville Street at Market Common!

This market is part of the Waccamaw Market Cooperative, a nonprofit organization that coordinates and manages numerous farmers markets along the Grand Strand throughout the week.

Three occur during the workweek, from 10-3. With that being prime work time, I can never make it. Luckily, there’s a few on Saturday.

So, I decided to travel up to the farmers market at Market Common one Saturday when I had some other errands to run in the area. I figured why not swing by and check it out!

All in all, it was SUPER nice!

First off, and to my surprise, parking wasn’t bad. I found a spot just a street over from Deville.

Secondly, there were a plethora of vendors.

Quite a few offered lush fruits and veggies, all grown and harvested locally, and the selections were fresh and wide-ranging.

There were other foods for sale there too, not just produce.

For example, Mountain Man Honey and Goods were selling rows of honey!

They set out regular jars of the sticky sweetness, but they also offered spun honey, which I had never heard of (much less tasted) until then.

Apparently, spun honey is creamier than normal honey, and it’s tastier too because they add in other flavors.

I purchased a container of Spinammon, and I would HIGHLY recommend it!

One vendor even sold bean dip!

Normally, I’m not a fan of beans, of any kind or in any form.

Yet, I bought a bowl, okay, two, of the Pepper Jack & Jalapenos varieties Carolina Bean Dip.

There’s a little bit of a kick to it, a little heat, and it’s so smooth. The balance of all the ingredients make it delicious and perfect for parties!

In addition to homegrown and homemade foods, there was jewelry and hand-built arts and crafts, like with Shoreline Studios and Lindzy Latherzs!

Check out YOUR local farmers market!

Here’s a complete schedule of farmers markets along the Grand Strand, with locations, times and vendor information.