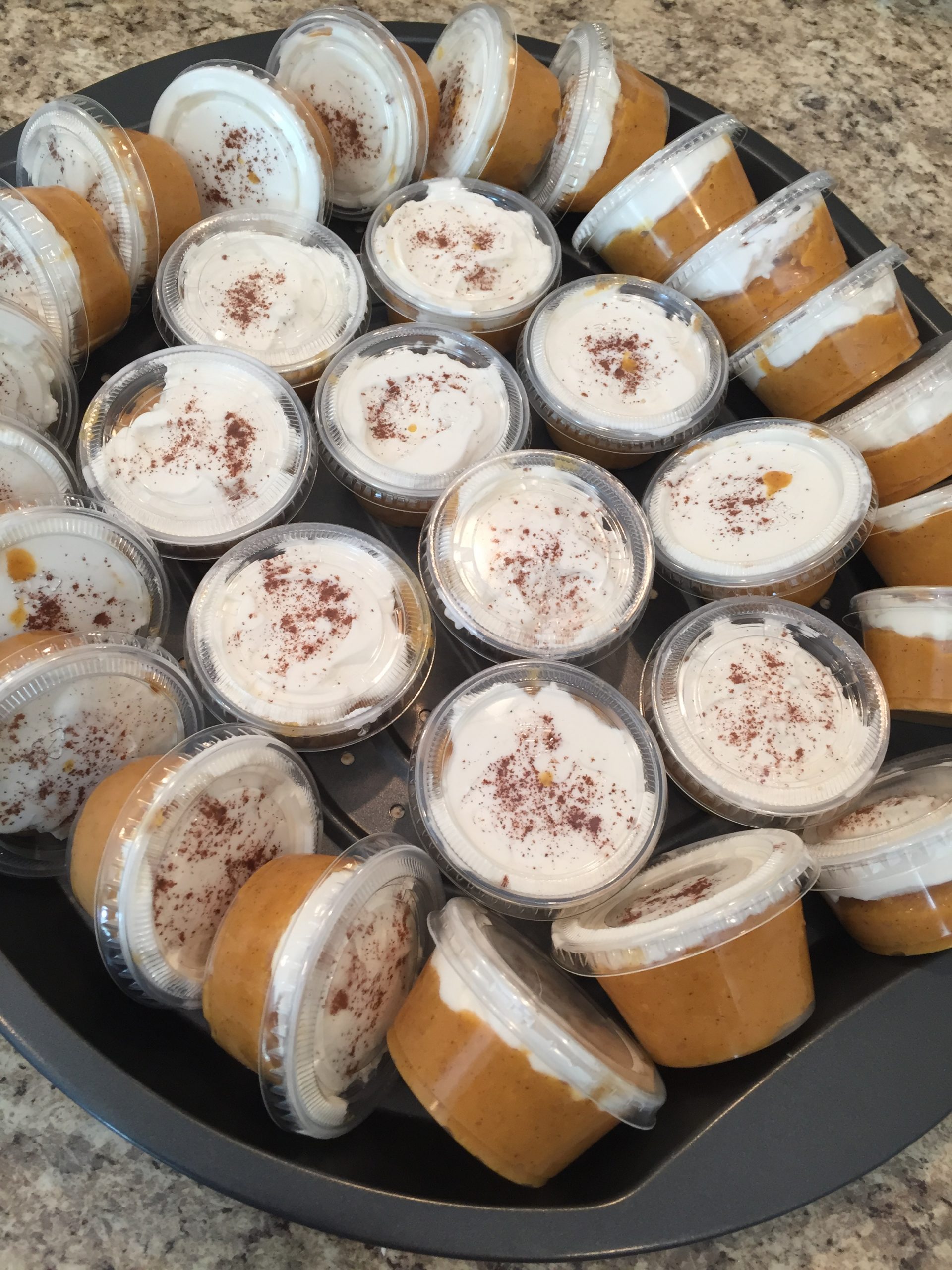 Presentation is key! I tried to make it look like a real pumpkin pie!

Does anyone really, and I mean really,truly, enjoy eating a nice, big, thick slice of pumpkin pie? Straight up? No topping?

At least – not anyone one I know…

Sure, there’s the few that will eat a little plain sliver once a year because they feel obligated to do so under the guise that it’s just not Thanksgiving without it.

But, for the most part, people have to drown it in cool whip, or some kind of cream, to stomach it.

So, instead of bringing another ‘ole plain Jane pumpkin pie to your next gathering, spice it up with Pumpkin Pie Pudding Shots from Delish!

Which is absolutely perfect if you don’t have time to stand over a stove or just aren’t that great in the kitchen.

Hey, no judging here. I’m right there with you.

More often than not, I feel guilty about always bringing the utensils or drinks or store-bought foods to events. Cause everyone else I know? They go all out. I’m talking hours of prep, multiple dishes, some made entirely from scratch.

With these! That’s how.

Admittedly, at first, I felt bad about rolling up to our Friendsgiving with just them. I mean, I just had… shots. Shots that I made sure counted as my beverage and side dish, which is what each person was supposed to bring. Shots that didn’t require cooking. Shots that were made dirt cheap. Shots that I threw together last minute!

But once I got there, and they started to get gobbled up, I didn’t feel ANY shame about bringing ’em!

I got the original recipe from Delish, which you can find above. However, many reviews said 1/2 a cup of Fireball was overwhelming. And even though I knew my group liked Fireball, I agreed it might be too much. So, essentially, I halved the Fireball, and I poured twice as much vodka. And since I needed more than twelve shots, I doubled the recipe. Below, you’ll find what I used and how I put it all together.

As a side note – a few people thought these were a little strong. So, if you’re friends and family don’t enjoy Fireball or drinking, I’d play around with the measurements a little bit. You could probably cut the Fireball out all together if you’d like.

Also – to make it easier on you, and so the graham crackers don’t get soggy, just set out a box instead of garnishing each cup with one cracker! This way, your guests don’t have to get their hands messy like with jello shots, and they can use however many to spoon out the pudding too!

– Spoon into shot glasses and refrigerate for about an hour.

– Top each shot with whipped topping and a dash of cinnamon.

– Use graham crackers to dip out and enjoy!

Your next Friendsgiving or Thanksgiving will be LIT with these Pumpkin Pie Pudding Shots!